DeepMind lost almost half a billion dollars last year [1] playing Starcraft I, which I guess puts the billion that Microsoft is about to burn in OpenAI’s furnace over the next several years in a somewhat better light. I’m not sure if it is sunk cost fallacy at this point or is there still any play here to make some PR, boost the mother company stock price etc.. Anyway, other investors in “AI unicorns” can study these examples as an approximation of their future “gains”.

I have also seen some indications of a bubble popping in the AI radiology space. As we all know, we no longer need radiologists, only it turns out we actually do. I don’t follow this space that closely but Max Little on twitter may have more details on that. 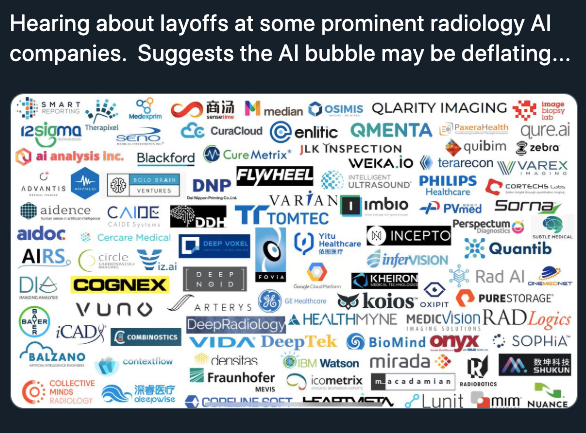 John Carmack is going to take a shot at AI. Whatever he accomplishes in that field I hope it will be equally as entertaining as Quake and equally as smart as the fast inverse square root algorithm.

All’s not well in the AI space; especially in Radiology. I can equally assume that the promises of “personalised medicine” via machine learning are overblown.

To place it in context:

Even though we are doubling the compute available to AI every 3.5 months, so a factor 10x per year, since say 2015, so some 10.000x, the classification performance as measured by top-1 accuracy on ImageNet had barely moved. Now arguably top-1 accuracy on ImageNet is probably not the best measure, but still that seems somewhat striking. The diminishing returns are visible elsewhere too, even that Open AI Rubic’s cube is somewhat indicative.

I don’t understand the algorithms (they are in the esoteric domain of statistics/heuristics and mathematics, but these graphs are instructive. You could have a whole cloud working towards solving the “AI problems” but solving Rubik’s cubes isn’t going to move the needle in the diagnostic or therapeutic space).

Meanwhile, the link below is an excellent exposition of the “driverless cars” and other AI failures that the deceptive marketing will never tell you about. It is a fool’s rush towards the “next frontier of science”- we need a basic sounding system in the cloud that quantifies the outcomes instead. Let’s hope that better sense prevails.